Several armed men stormed and opened fire inside a bar in the Mexican tourist town of Cancun on Thursday, killing seven people and wounding five. The shooters used machine guns and pistols in their attack. 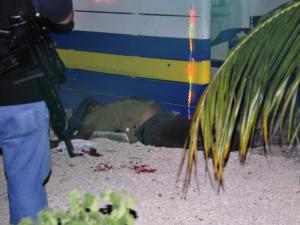 A more-than major tourist destination, Mexico’s Caribbean coast, until now has not been known for drug-related violence like the kind that has rocked old school Acapulco.

Soldiers were sent to guard the hospital were the wounded are being treated.

Current Mexican President, Enrique Pena Nieto, vowed to reduce violence in his country but more than 70,000 people have been killed in drug-related violence in Mexico since 2007. Source.

Police are still trying to determine a motive for this attack.