By request! Russell Westbrook of NBA’s Thunder having a total temper tantrum! Some are saying he acted like a big baby while others are making light of the whole ordeal… Either way he looks pissed! 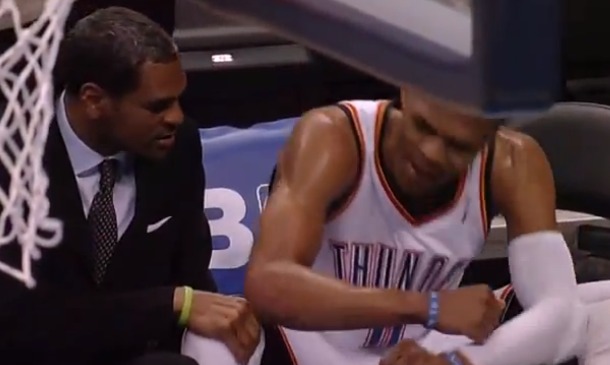 With 8:53 left and his team up 25 in the third quarter of the Thunder’s 106-89 win over Memphis on Thursday night, Russell Westbrook and Thabo Sefolosha exchanged heated words over a five-second backdown violation. Westbrook was upset Sefolosha made a cut to bring over a second defender. The two barked at each other and things went on. CBS

What do you think? Did he go off the rails? Or is he snorting them?

Fame or self: Which matters more?
Self or wealth: Which is more precious?
Gain or loss: Which is more painful?
He who is attached to things will suffer much.
He who saves will suffer heavy loss.
A contented man is never disappointed.
He who knows when to stop does not find himself in trouble.
He will stay forever safe.