Brawl Breaks Out At Camacho Funeral

So much for being laid to rest! Hector “Macho” Camacho’s funeral was marred today by a brawl involving the boxer’s former girlfriend, his sisters and another mystery girl.

Camacho was shot dead on November 20 at the age of 50 in his home country of Puerto Rico. 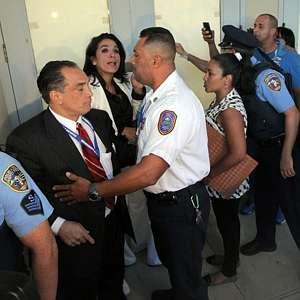 According to the Associated Press out of Puerto Rico, family, friends, fans and fellow boxers had gathered to say goodbye to the slain fighter.

A fight broke out after Cynthia Castillo, 28, dressed in a pink T-shirt with Camacho’s face emblazoned across the front, leaned down to kiss Camacho on the mouth in the open casket.

She then walked over to the family’s reserved area, and that’s when things got ugly and intense. A fight between Castillo, his former girlfriend, 50-year-old Gloria Fernandez, and Camacho’s sisters broke out.

“I am the actual girlfriend of Macho, and those who don’t like it better not bring it,” said Castillo, who claims she was Camacho’s girlfriend at the time of his death. “They shouldn’t be going after me. They should be thanking me for being with him at all times.”

Castillo said Fernandez and Camacho’s sisters, Esther and Estrella, told her she had to leave.