Dinesh D’Souza, the conservative pundit who created the anti-Obama movie, 2016, quit his job as president of an evangelical Christian college after it was learned – he is currentlly engaged to a young woman – and he is married… At the same time. 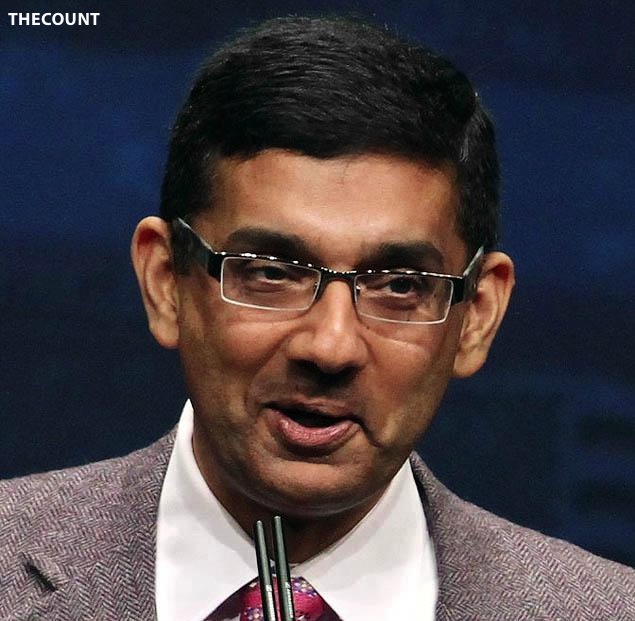 D’Souza, 51, had brought his 29-year-old fiancée to a religious conference, and they shared a hotel room.

His resignation from The King’s College was announced Thursday by Andy Mills, chairman of the institution’s board of trustees.

A former Ronald Reagan aide, D’Souza is a best-selling conservative author and director of the controversial documentary “2016: Obama’s America” — which cast a critical eye at the President’s upbringing and early influences. The film has grossed more than $33.4 million in the United States, making it the fourth-most successful documentary of all time.

D’Souza stepped down from his post after World magazine, a Christian publication, published a bombshell story revealing he had become engaged to Denise Joseph while still legally married to his wife of 20 years, Dixie Brubaker, from whom he separated in 2010.

The World reported Thursday that D’Souza brought Joseph to the Christian values event in late September in South Carolina and the pair shared a room at the Comfort Suites in Charlotte.

During the “Truth for a New Generation” conference, he introduced Joseph, whom he only met three months ago, as his fiancée, World reported.

A few days later, D’Souza got around to filing for divorce from Brubaker.

World also reported that one of the conference organizers, Alex McFarland, was so distressed by D’Souza’s behavior that he confronted the academic, who confessed he spent the night with Joseph.

D’Souza called the World story “pure libel” in an opinion piece published Thursday on FoxNews.com, a day after telling The Associated Press his engagement to Joseph was off. But he did not deny the main thrust of the story.

“I had no idea that it is considered wrong in Christian circles to be engaged prior to being divorced, even though in a state of separation and in divorce proceedings,” D’Souza wrote.

“Obviously, I would not have introduced Denise as my fiancée at a Christian apologetics conference if I had thought or known I was doing something wrong,” he wrote. “But as a result of all this, and to avoid even the appearance of impropriety, Denise and I have decided to suspend our engagement.”

“RINO Dads are those guys who will sheepishly and proudly fill out Republican ballots on Election Day while their wives openly mark their support for things like ‘freedom of choice’ and ‘freedom from poverty,’ ” she wrote on her blog in January.

The King’s College, whose curriculum includes religious faith, Western philosophy, economics and public service, accepted D’Souza’s resignation “to allow him to attend to his personal and family needs,” said Mills.

The “Truth for a New Generation” conference bills itself as part of a “15-year initiative to preserve America and restore her to the Christian principles upon which the United States was founded.”