Supreme Court Justice Antonin Scalia got a ticket from the Philadelphia Parking Authority. The fearless cop issued the infraction despite a dash placard that reads “Supreme Court of the United States POLICE OFFICIAL BUSINESS.” LOL! 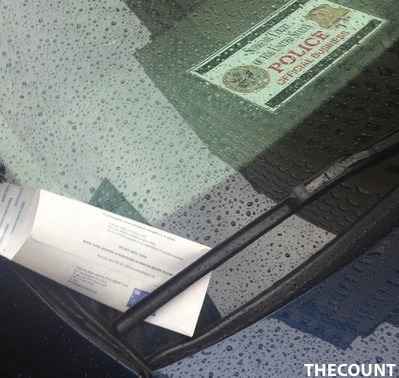 Someone forgot to tell Supreme Court Justice Antonin Scalia to park in the middle of the street. Instead, his driver parked in a loading zone during a visit to the Union League Monday, and the ever-efficient Philadelphila Parking Authority quickly issued tickets for the Supreme Court cars.

Parking Authority executive director Vincent Fenerty is a Republican, but he showed no mercy Tuesday for Scalia, the court’s conservative standard bearer.

“The vehicle was ticketed and the ticket is valid,” said Fenerty, not long after hearing news of the Scalia violation from a reporter. Two cars were ticketed at a cost of $31 each.

Kathleen L. Arberg, the Supreme Court’s public information officer, would say only that “the ticket was issued to a U.S. Supreme Court vehicle driven by a Supreme Court police officer.”

Scalia was visiting the Union League to talk about his latest book Reading Law: The Interpretation of Legal Texts to the local Federalist Society.

Technically, Scalia was in South Philly, or at least on South Broad, so he probably should have followed local custom and parked in the middle of the road.