Woman Crushed by Own Car During Repo

A woman has died while she was trying to stop a tow truck driver from repossessing her car! 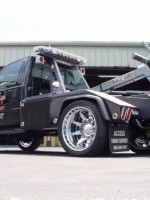 CBS Los Angeles stated, “The tow truck driver Leo Song told detectives he backed up his truck to a 2002 Buick parked in the driveway of Via’s mobile home in Chino Hills. As he lifted the car, Via came out and begged Song not to take her car. He told her he had to take it. He said he assumed Via had moved away when he began to pull the car, but the woman’s husband approached him and said his wife was trapped under the Buick.”