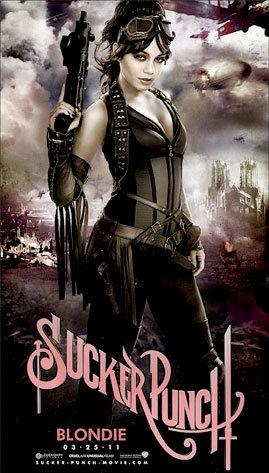 It’s official, one of Disney’s “High School Musical” stars has left her Disney diapers. Vanessa Hudgens is one of the six babes who star in Zack Snyder’s“Sucker Punch!”, which comes out in March 2011.

I don’t need to explain her transition! Just look at her in the new Sucker Punch! poster. From innocent cheerleader to leather-strapped killer!

Vanessa’s boyfriend Zac Efron, who starred alongside her in High School Musical, is breaking out of his Disney straight-jacket too, starring in Summer drama film “Charlie St. Cloud”.