Madonna & her 13 year old daughter Lola (Lourdes Leon) have a new clothing line!  Macy’s will carry the junior clothing line which will be called Material Girl.  Good thing is……..the price will be quite affordable for everyone starting from $12 to $40.  Lola has been interested in designing clothes ever since she was influenced by Madonna’s friend Stella McCartney. 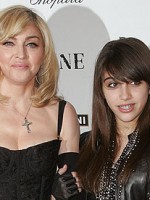 Lola has even worked on Madonna’s tour in the wardrobe department.  She has stolen Madonna’s clothes right out of her closet!  Lola bothered Madonna for a long time about designing clothes.   It’s very cool that Lola wants to do something like this with her mom and shows her individuality too.  Madonna says that Lola has a great sense of style and is very creative.

The clothing will have an eclectic vibe with stripes of black & white, cabbage roses and slouchy tops and tutus.  Many of the items  can be layered.  Look for some fingerless gloves and jewelry accessories.  Maybe even eyewear later.

Look for the clothes at Macy’s in August sometime.

I look forward to see how the clothing line does and what to see from Lola in the future!