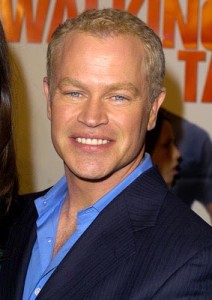 That’s right, actor Neal McDonough from Desperate Housewives andBand of Brothers, was ‘let go’ from new ABC show “Scoundrels” for declining a sex scene. It is known that he doesn’t do sex scenes because of his religious beliefs/morals/values, but the ABC show tried to get him to do it anyway! So Neal left the show. It is unclear if he was fired or Neal walked out.

Okay I get it and everything but we’re talking about an ABC show, not soft porny Cinemax! Very different! I know how these scenes go because I’ve work in movies and TV. They usually (99%) hire body doubles for the body shots and risque angles, and use the star actors for the close-ups. So there may be a scene where the star actors are on top of each other for the close-up shot, but there is usually a sheet in between them, or the actress is wearing pasties and some sort of underwear! There are plenty of ways to cheat a sex scene, but maybe there was no way out of what ABC wanted to do, and Neal was like no ifs, ands or buts!

“Neal McDonough is a marvelous actor who elevates every role he plays, whether it’s in Band of Brothers or Desperate Housewives. So when he was suddenly replaced with David James Elliott 3 days into the filming on ABC’s new series “Scoundrels” earlier this week, there had to be a story behind the story. The move was officially explained as a casting change. But, in fact, McDonough was sacked because of his refusal to do some heated love scenes with babelicious star (and Botox pitchwoman) Virginia Madsen. The reason? He’s a family man and a Catholic, and he’s always made it clear that he won’t do sex scenes. And ABC knew that. Because he also didn’t get into action with Nicollette Sheridan on the network’s Desperate Housewives when he played her psycho husband during Season 5. And he also didn’t do love scenes with his on-air girlfriend in his previous series, NBC’s Boomtown, or that network’s Medical Investigation. “It has cost him jobs, but the man is sticking to his principles,” a source explained to me. You can’t help but admire McDonough for sticking to his beliefs, even if he’s poised to lose as much as $1 million in paydays for Scoundrels, which is based on the New Zealand series Outrageous Fortune centering on the matriarch (Madsen) of a family of criminals who decides it’s time for her brood to go straight after her husband (McDonough, now Elliott) is sentenced to a long prison term. (“I thought these things only happened to women in LA!,” a source mused.)”