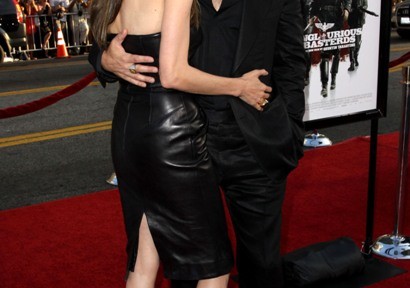 Brad Pitt’s new movie Inglourious Basterds, directed by Quentin Tarantino, had it’s Hollywood premiere last night! Brad Pitt showed up hooked to his honey Angelina. The two looked like they were having a fun time on the red carpet together. Actress Diane Kruger, who co-stars in the film with Brad, showed up stag. Why no date for Diane? What’s even worse, Angelina stole Diane’s limelight. People are were like “Diane who?”

But wait! There’s more. I also noticed that Brad and Diane didn’t take any photos together at this premiere. Why not? At premieres, stars usually take photos with all of their cast mates. Well, I found out through some research that Diane and Brad did take some photos at the movie’s premiere when it was in Berlin. One of the photos they took together obviously caused some problems between Ange and Brad. You can tell at the Hollywood premiere that Ange would NOT let Brad out of her reach this time! See for yourself! The ‘questionable closeness’ photo of Brad and Diane is at very bottom.