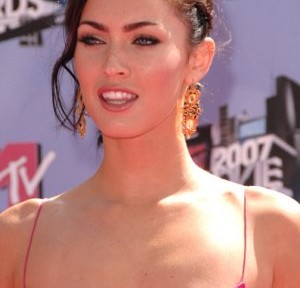 1. Original last name was spelled “F-O-X-X” until her father dropped the second “X.”

2. She has nine tattoos, and is a self-proclaimed “addict” – check out pictures of all her tattoos!

3. Is of Irish, French and Cherokee ancestry.

5. She once owned a pet squirrel.

6. Did not date anyone until she moved out of parents house, one of her first boyfriends was the kid from 7th Heaven? WTF?!

8. Her middle name is “Denise”

9. Her favorite comic artist is fellow Tennessean is Michael Turner who passed away in 2008 from bone cancer.

10. She was born in Oakridge, Tennessee which was a secret city that didn’t exist on the map until the 1950’s because of it’s involvement with the Manhattan Project.

11. Her Irish ancestors were from County Tipperary, one of the first Irish counties to be established in the 13th century.

12. Is the daughter of Darlene Tonachio.

15. Born on the same day as the release of hit action film “Top Gun“.

16. While shooting Transformers, she lost two of her big toenails.

18. On August 4th 2009 Men’s lifestyle magazines called for a media blackout aka boycott.