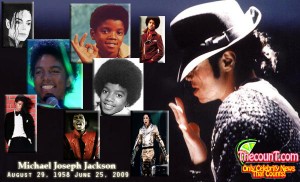 There is no question; Michael Jackson was a sick man. How did he then pass a rigorous medical exam only weeks before his death?

Now Michael’s father and sisters, are all speaking out. Joe Jackson told ABC News “I was worried about his health, because all the shows that I’m seeing, no artist can do that many shows back to back like that.” Sister, La Toya was much more vocal, stating publicly, “Michael was murdered.” Sister, Janet, has said she tried to set up an intervention to save her brother’s life, but was stopped short of her goal by Michael’s “people.”

The questions are many, however, they are indeed becoming much more pointed;

Was Michael pushed to hard? So hard, it caused a chain of unfortunate events that’s left him dead?

Instead of planning 50 concerts, should Michael have been hospitalized?

Why did NO ONE close to Michael, including his doctors, have him committed to rehab?

Why did Michael’s handlers stop his family from intervening with him, and possibly saving his life?

Why was Michael allowed to receive medication and medical treatments in his home, usually only administered and/ or performed in a hospital?