Hayden Panettiere and Jesse McCartney Together?

Radaronline.com reports that they saw Pop singer Jesse McCartney and “Heroes” starHayden Panettiere making out last night! We are so into it! Love them. 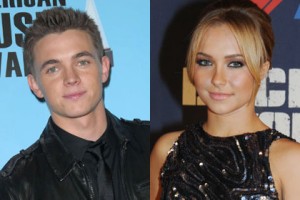 Their story says this:
(Hayden and Jesse at Crown Bar last night)…”And when we say ALL OVER, that’s exactly what we mean. She was holding him tighter than Michael Phelps gripping that bong. The Heroes star was sitting on Jesse’s lap while he kissed her neck. Then she got up and did some crazy sexy dance in his lap. they went outside to smoke and he wrapped his arms around her from behind and was kissing her neck again. (It started to look like an episode of True Blood; dude has some sort of next fixation for sure.)
In the middle of this, a girl approached Hayden to ask for her autograph on the back of a store receipt. Hayden was nice enough to oblige.”
Love it!