Rosie O’Donnell’s Variety Show: ‘Crash and Boom’ according to some 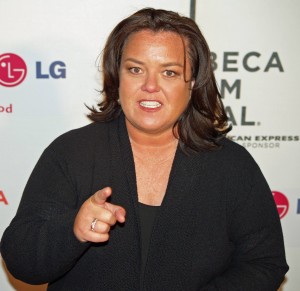 NBC’s attempt to revive the network with this variety show, failed to draw an audience last night, tying for the evening’s lowest-rated program.

A mere 5 million viewers tuned in for the 8 p.m. premiere of “Rosie Live,” with the program earning a 1.2 preliminary adults 18-49 rating. The telecast matched ABC’s recently canceled “Pushing Daisies” as the night’s lowest-rated program on a major broadcast network.

Critics were not kind. The NY Times described it as “hokey comedy with an enemies list.” TV Guide called it a “ghastly ego trip.” And the LA Times asked,“Rosie, what on earth were you thinking?” We call it: “The talent still got paid!”

NBC’s variation, in particular, seemed unlikely to attract a broad audience given O’Donnell’s divisive personality. Stocked with appearances by Alanis Morissette, Ne Yo, Rachael Ray, Harry Connick Jr., Clay Aiken and Gloria Estefan, along with Minnelli, Baldwin, Griffin and Krakowski, the line up’s appeal also skewed heavily female for a primetime show airing on the eve of a family holiday.

Network TV ain’t doin’ so great in general, so the talent may NOT be the one to blameeeeeee.

Remember, when you point a finger at someone, you got 4 pointing back at you!