Ashton Kutcher at dinner with a recovering Diddy 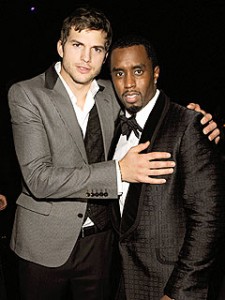 at the Geisha House in Hollywood. The music mogul had just undergone rotator cuff surgery, sources tell us, and was on a “very strict diet.” In fact, Diddy ordered chicken yakitori and rock shrimp tempura, two house specialties, but ate very little of both dishes.

Speaking of geishas, Avril Lavigne was dressed like one for an early Halloween celebration at Key Club in West Hollywood, where she belted out Joan Jett’s “Bad Reputation” during a special performance. The punky singer sang with a band that included her hubby Deryck Whibley, who wore a nurse’s costume and Joker-like face paint. Lavigne was introduced as “Mrs. Whibley” and “sounded amazing” during her turn on the mic, a source says. When they weren’t performing, the singer and her rocker husband shared a table at the nightspot with Mischa Barton, who was without a costume, though she did wear a headband for her night out.

At Hyde Lounge in Los Angeles, Lindsay Lohan and girlfriend Samantha Ronson double-dated with Nicole Richie and Joel Madden. The foursome sat in a booth and enjoyed dessert. “They were having a great time hanging out with each other,” an onlooker says. When they weren’t eating, the couples danced off the calories.

Natalie Portman, eating some pumpkin soup during a visit to French eatery comme Ãƒ¡a in Los Angeles. The actress dined with eight people and was definitely talking business, an onlooker says. Also at the restaurant: Courtney Love, who ordered the soup, a salad and a lemon tart. The rocker was also having a business meeting, and an onlooker reports that she had clothing samples at her table.

Dave Annable and Matthew Rhys made the most of hosting the DKNY dinner at BondST in Los Angeles, charming the table of (mostly) ladies with a constant stream of jokes and self-deprecation. Annable got a nice surprise when he arrived to find himself sitting next to actress Emmy Rossum. “They were really cute and seemed to hit if off right away,” says a fellow guest.

Sharon Stone, browsing the denim section at Live On Sunset in Los Angeles. The actress picked up a pair of AG jeans and “was friendly, polite, quiet and looked beautiful,” an onlooker says.

Katie Lee Joel, grabbing a candy-themed cocktail and mingling with guests at a party for Dylan’s Candy Bar on New York’s Upper East Side. Also at the bash: Ivanka Trump and director Woody Allen, who led his children Bechet and Manzie around the store looking at the colorful candy displays with wife Soon-Yi Previn.