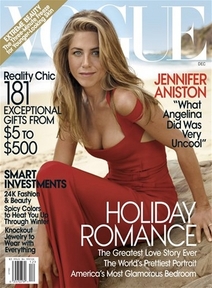 PEOPLE – NEW YORK – Jennifer Aniston says Angelina Jolie was out of line when she spilled details about her relationship with Brad Pitt while they were filming “Mr. & Mrs. Smith.” In an interview in the December issue of Vogue, Aniston talks about the magazine’s 2007 profile of Jolie, who talked about growing chummy with Pitt — then married to Aniston — while shooting the action film in 2004.

“There was stuff printed there that was definitely from a time when I was unaware that it was happening,” Aniston says. “I felt those details were a little inappropriate to discuss. That stuff about how she couldn’t wait to get to work every day? That was really uncool.”

Jolie recently told The New York Times that she and Pitt fell in love on the “Mr. & Mrs. Smith” set.

Pitt and Aniston, who were married in July 2000, announced their separation in January 2005. In the months that followed, Pitt was seen in public with Jolie. Pitt and Aniston divorced in October.

In May 2006, Jolie gave birth to a daughter, Shiloh Jolie-Pitt. The couple now have six children, including 4-month-old twins who were born in July.

Aniston tells Vogue that she and Pitt are on good terms.

“We have exchanged a few very kind hellos and wishing you wells and sending you love and congratulations on your babies,” she says. “I have nothing but absolute admiration for him, and … I’m proud of him! I think he’s really done some amazing things!”

Asked about her breakup, the 39-year-old actress says: “Well, it never was that bad. I mean, look, it’s not like divorce is something that you go, `Oooh, I can’t wait to get divorced!’ … But I’ve got to tell you, it’s so vague at this point, it’s so faraway in my mind, I can’t even remember the darkness. I mean, in the end, we really had an amicable split.”

Aniston, who stars in the upcoming films “Marley & Me” and “He’s Just Not That Into You,” also dishes on her post-divorce romances with Vince Vaughn and John Mayer.

“I call Vince my defibrillator,” she says of her co-star in 2006’s “The Break-Up.” “He literally brought me back to life. My first gasp of air was a big laugh! It was great. I love him. … He was lovely and fun and perfect for the time we had together. And I needed that. And it sort of ran its course.”

As for the tabloid fuss over her relationship with Mayer, she says: “Love just shows up and you go, `Oh, wow, this is going to be a hayride and a half.’”

Aniston says she feels protective of the 31-year-old singer, who was criticized for talking to the media about how he ended their romance.

“Trust me, you’ll never see that happen again from that man,” she says. “And it doesn’t take away from the fact that he is a wonderful guy. We care about each other.”