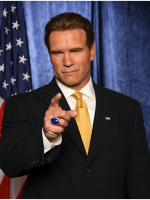 I thought it was pretty lousy news when it was announced the Arnold Schwarzenegger and Maria Shriver were splitting up. They appeared very happy with each other. The split shook a lot of people.

The shock increased when it was announced a few days ago that Arnold fathered a child more than a decade ago with a long-time family employee. And finding out all the details from Mildred Patricia Baena takes all of this to a whole new level. According to recent reports Arnold only fessed up to Maria about 4 weeks ago, which led to the initial separation.What still isn’t clear is whether or not she suspected anything over the last 6 or 7 years since Arnold found out.

According to TMZ sources, Arnold came clean after leaving office in California. Shriver is said to be positioning herself with a financial advisor in preparation for a divorce.

This is far from the first of the Baby-Daddinator’s indiscretions. If you recall his 2003 election campaign, you may recall Gropegate, where a half dozen women spoke to an LA Times reporter about having been groped and harassed by Mr. Schwarzenegger. And Arnold didn’t even deny it at the time. And more recently Gigi Goyette has come out saying that she had an affair with Arnold in the late 90′s (after he was married) and that she was only one of about a dozen women at the time.

Maria Shriver, the daughter of Sargent Shriver and Eunice Kennedy Shriver, is a no-nonsense woman who’s showing her mettle. Something like this brings the entire past decade into question. How much of it was a lie? What can I believe? Why would I ever stay with him? Maria Shriver certainly doesn’t need Arnold in her life to be the strong, self-reliant woman that she is.

Commenting on the situation, Shriver admits she is distraught and asks for “compassion, respect and privacy,” for her and her children.

Not everyone has the luxury of having zero tolerance for anything less than 100 percent commitment. Most of us have to accept that a certain amount of nonsense and deceit will be present in our lives. I don’t envy her current position, but certainly it’s liberating to be able to say no and no more.

The kid who plays Vincent Crabbe in the Harry Potter franchise got busted for, not a sack-o-weed, but 10 grass plants! all growing at his mum’s house no less!

Jamie Waylett plead guilty along with a buddy in Westminster Magistrates’ Court, London, to producing cannabis.

At least now we know some of the inspiration they use to produce those trippy Harry Potter flicks!