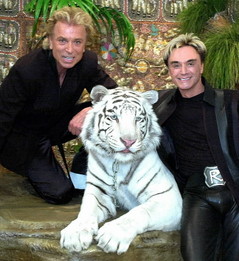 Horn was injured by the 380-pound tiger during a live performance by Siegfried & Roy at The Mirage hotel-casino in 2003. Roy maintains the tiger named, Montecore, did not attack him but was trying to drag him to safety after he experienced a stroke.

“The world has lost one of its most majestic creatures and I have lost a brother,” Horn said in a statement Tuesday. “I will forever believe it was his concern for my safety and well-being that caused him to act as he did on that night long ago. END_OF_DOCUMENT_TOKEN_TO_BE_REPLACED