A soldier was ambushed Wednesday in the Canadian capital of Ottawa, after a gunman entered Parliament and opened fire.

Prime Minister Stephen Harper was in the building and safely escorted from the scene. 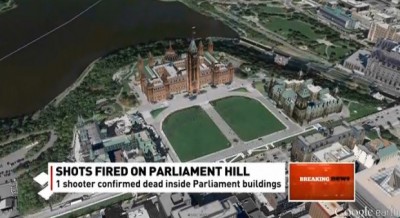 “I heard this pop, pop, pop and thought it was dynamite for construction rather than else,” John McKay, a member of Parliament, told Canadian network CTV.

The gunman was shot by security forces, authorities said, and Canadian television reported that a man believed to be the gunman was seen being removed from the building by a gurney.