A viral photo of a cop hugging a boy at a Portland Ferguson protest this week was in reality staged publicity stunt. The boy was holding a sign that was offering “free hugs.”

The moment, which was supposed to be spontaneous, was actually staged by a photographer who suggested the pair embrace. 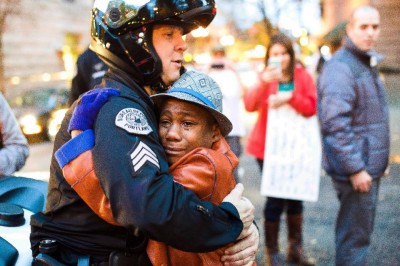 Mainstream press outlets reported the “moment” like this: Portland rally was 12-year-old Devonte Hart, who stood crying out of sadness over the events in Ferguson. He was holding a “Free Hugs” sign. END_OF_DOCUMENT_TOKEN_TO_BE_REPLACED