Tamron Hall of NBC‘s Today show has forgone her multi-million dollar contract after the network relieved her of her “Today’s Take,” hosting duties to make way for former Fox News siren, Megyn Kelly. “Tamron was offered a multiyear, multimillion-dollar deal to stay at the ‘Today’ show and she turned it down,” the insider said. “People inside NBC were shocked. They expected her to stay,” a source said. END_OF_DOCUMENT_TOKEN_TO_BE_REPLACED

Weatherman, Al Roker, like you’ve NEVER seen him before, delivering today’s forecast in an outfit inspired by Fifty Shades Of Grey..

Before you call NBC to complain, it was all Ellen DeGeneres‘ doing. 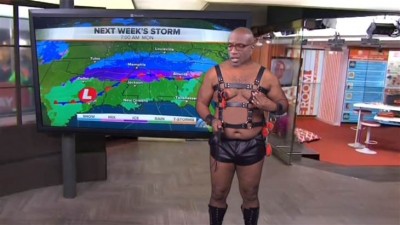 On Tuesday’s “Ellen DeGeneres Show,” another member of the TODAY family found himself sporting leather, tassels and more. END_OF_DOCUMENT_TOKEN_TO_BE_REPLACED