NEW ORLEANS, LA. (THECOUNT) — Janee Pedesclaux, of New Orleans, Louisiana, has been identified as the mother who slit the throats of her young children and made several Facetime calls to their father, Jermaine Roberts, before sharing a video on social media of herself dripping in blood. 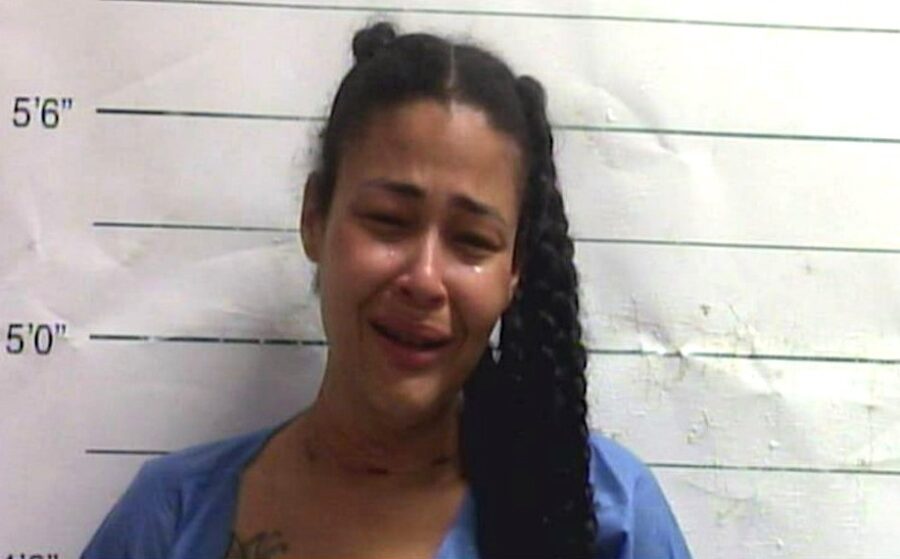 According to arrest records, the attack brutal began after Pedesclaux called her children’s father and told him that she had damaged his car. Pedesclaux reportedly told Roberts that she did not intend to go to jail and would kill herself and her kids, reports WWLTV.

The report says Pedesclaux called Jermaine Roberts a third time, allegedly showing both children bleeding from the neck with the 4-year-old girl on a bed appearing to gasp for air.

Police say Roberts immediately called 911 and then drove to Pedesclaux’s home in the 3100 block of Law Street. At the home, Pedesclaux allegedly blocked Roberts from entering the home.

Records say Roberts broke a window to enter the home and found the 2-year-old boy face down in blood at the head of the bed. The 4-year-old girl was also lying on the bed and foaming from the mouth.

Roberts told police that he saw Pedesclaux with a knife in her hand, and he tried to take it away from her. Pedesclaux allegedly bit Roberts and ran to the kitchen to get another knife. Roberts then picked up the children from the bed and tried to leave the home.

The report says while Roberts was trying to leave, he saw Pedesclaux put a knife to her neck, but did not injure herself.

The children were taken to University Medical Center where they were rushed into emergency surgery. After multiple life saving procedures were tried, Paris Roberts was pronounced dead at the hospital.

New Orleans police say it was later learned that Pedesclaux harmed herself after the children were taken to the hospital. Paramedics took her to University Hospital for treatment. Her injuries were superficial to the collar bone area and not considered life-threatening, the report says.

The NOPD said at some point Pedesclaux posted a video on social media where she threatened to kill herself.

The report said Paris Roberts had a cut on her neck down to her spine, damaging her trachea. As a result, she suffered hemorrhagic shock due to the cut. She also had cuts on her knees, right leg and left shoulder.

Jay’Ceon Roberts also had an injured trachea, but doctors were able to stabilize him, the report says. Jay’Ceon Roberts had a cut to his neck and several cuts to his chest, arms, both legs and fingers.

Court records show that Pedesclaux was in a child custody dispute with Jermaine Roberts. Roberts reportedly sued Pedesclaux in April seeking joint custody that would give him primary care, but allow Pedesclaux to see the children on weekends. In court documents, Roberts argued that Pedesclaux was “not stable or providing a healthy environment for the kids.”

The family of Paris and Jay’Ceon Roberts issued a statement on Tuesday asking for privacy two days following the stabbing of both children.

“On Sunday morning the Pedesclaux family endured an unspeakable tragedy. Mental health is a crisis that is affecting every family and ours is no different. The lack of mental health services and the toxic mix of social media has added to the problems we face as a community. This is a large family of faith and we ask with all humility that the city pray for our family and for our Paris and Jay’Ceon.”

A conviction on a second-degree murder charge would bring a life sentence.