LAKE COUNTY, IL. (THECOUNT) — Robert “Bobby” Crimo III has been identified by the FBI as a person of interest in the Highland Park mass parade shooting Monday.

22-year-old Crimo is said to be driving a Silver Honda Fit with the license plate “DM80653.” Crimo is considered “armed and dangerous.” 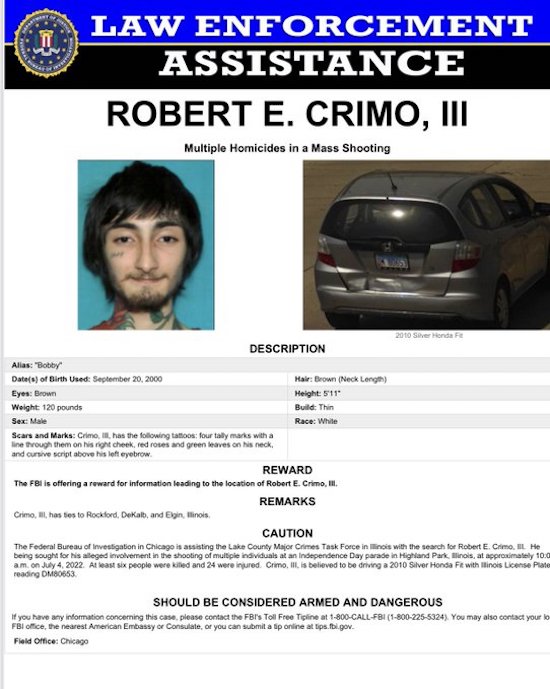 A TikTok video circulating on social media shows the moment shots rang out during the opening minutes of a 4th Of July parade in Downtown Chicago’s Highland Park area.

At least 5 people were killed and scores more injured in the Monday afternoon Highland Park shooting.

The shooter or shooters remains at large.

In the video, posted to TikTok, a marching band can be seen performing on the parade route, when suddenly multiple shots ring out. People lining the route can then be seen fleeing in terror.

There are reportedly multiple fatalities following a shooting at an Independence Day parade in Highland Park, Illinois.

Warning: Gunshots heard in below video.pic.twitter.com/F0BrsEXIS8

Several witnesses to the shooting said they believe the shots came from an elevated position.

Some reports say 19 people were transported to area hospitals with unknown injuries.

Here’s the full statement from the city:

“Highland Park Police are responding to an active shooter incident that occurred in downtown Highland Park during the 4th of July parade. This is an active incident. All individuals are advised to shelter in place. Law enforcement agencies are searching for the suspect; evidence of a firearm has been recovered. Numerous law enforcement officers are responding and have secured a perimeter around downtown Highland Park. 16 people have been transferred to the hospital; 5 individuals are confirmed deceased.

More information will be posted to cityhpil.com as it becomes available.”