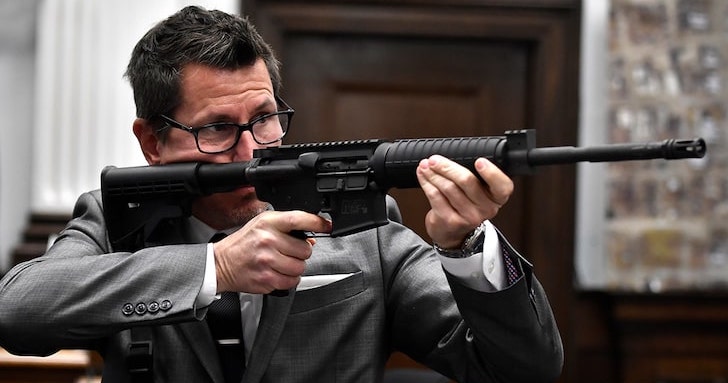 KONOSHA, WI. (THECOUNT) — Assistant D.A. Thomas Binger, the prosecutor in the Kyle Rittenhouse case, is under fire for pointing an AR-15 directly at the jury during closing arguments on Monday.

Social media critics are comparing his conduct to the fatal shooting on the “Rust” set.

Binger was in the middle of his closing argument Monday, when he tried to stage a re-enactment of the scene captured on drone video, just before Rittenhouse opened fire … killing 2 and wounding a third.

Binger was trying to show the jury how ominous the 18-year-old defendant was on the streets of Kenosha back in August 2020 … by grabbing the gun in open court and pointing squarely at the 18 people in the jury box … 12 of whom were selected to decide the fate of Rittenhouse, reports TMZ.

Binger violated the first rule of gun safety … don’t point the weapon at human beings just for show. As you know, one of the protocols broken on the “Rust” set was just that … Baldwin was pointing the gun at the Assistant Director and the Cinematographer.

The demonstration drew the ire of a bunch of folks on social media … “Rittenhouse prosecution DA points a gun at the jury, finger on the trigger, to give an example of what it looks like working with Alec Baldwin on a movie set.”

Another wrote, “Binger and Alec Baldwin need to attend a firearms safety class taught by Kyle Rittenhouse.” And, there’s more … “Prosecutor in Rittenhouse case aimed a gun with his finger on the trigger at the jury while saying someone was reckless with his gun.”

The jury began its deliberations … Kenosha is bracing for a verdict.