POLSON, MT. (THECOUNT) — Patti Baumgartner was sick and tired of drivers speeding down her Montana street, so she decided to trick the driver into hitting the breaks by pointing a hair dryer and replicating a radar speed trap. And so far, it working.

Baumgartner, a grandmother in Polson, is now an honorary state trooper after taking the problem with speeding driver into her own hands, with the use of a handy blow dryer. 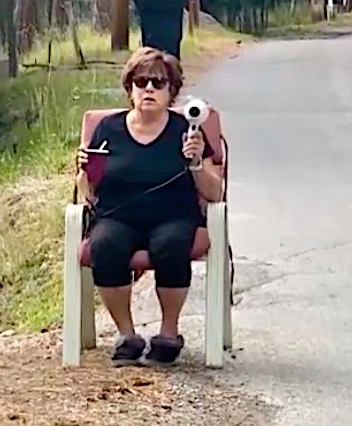 Baumgartner was photographed by her son showing her clever idea to get drivers to slow down for safety.

“They forget to slow down, and there are a lot of people that are complaining about that they can’t walk or ride their bikes. I wouldn’t even attempt riding a bike around,” she said. “We were talking about maybe something would slow the cars down. So, we decided to put me in a chair and I guess use the hair dryer as a speed thing,” Baumgartner said.

Baumgartner’s son took the picture of her and tweeted it out to Trooper Noah Pesola, hoping to catch his attention. It did.

“I thought it was hilarious. I think that we have a speed issue in Montana, and I thought it was a great creative idea for the public to try and combat that a little bit without making people too upset,” said Pesola.

Pesola liked it so much he gave Baumgartner a special title.

“It’s not an official or anything like that for the honorary trooper, which is kind of what I called it. I didn’t know what else to do for her, when she’s doing something for the community and like she says, she’s got grandkids in the area so she’s doing something for her grandkids’ benefit. The best thing I could think of was give her a trooper hat and a badge to make her look a little more official,” he said, reports Live5News.

Baumgartner says she can’t tell if her white hair dryer really slowed cars down, but she plans to use it again to bring awareness to speeding cars in the neighborhood. 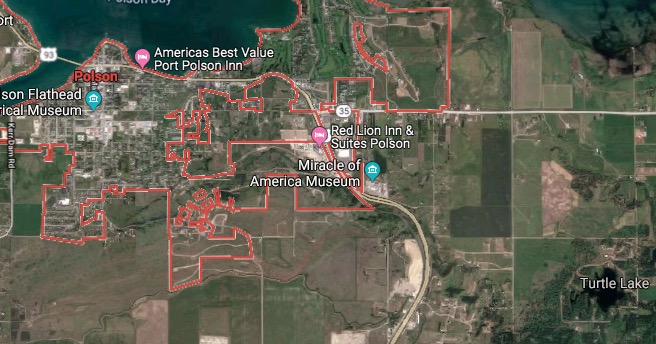 Geo quick facts: Polson is a city in Lake County, Montana, United States, on the southern shore of Flathead Lake. It is also on the Flathead Indian Reservation. The population was 4,488 at the 2010 census. It is the county seat of Lake County. The city was named after pioneer rancher David Polson – Wikipedia.