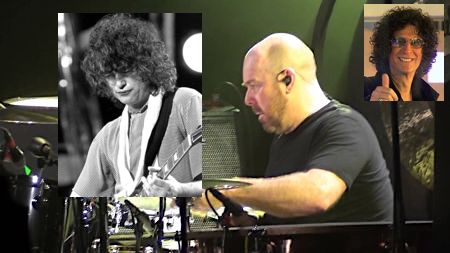 NEW YORK, NY. (THECOUNT) — Jason Bonham, the son of late Led Zeppelin drummer, John Bonham, recalled while appearing on the Howard Stern Show, the time Zeppelin guitarist Jimmy Page introduced him to cocaine when he was just 16 years old. The introduction set off years of his own drug use.

Also a drummer, Jason, who took his father’s place when Zeppelin reunited for a show in 2007, reflected on how his drug consumption led to comparisons with his dad, which he mistakenly took as a “compliment.” The incident took place in a hotel while the band was on tour, Jason told Howard on SiriusXM in a new interview. “Jimmy was the first one to ever give it to me,” reports UltimateClassicRock.

“We got called to his room. … I was 16 at this point, and there was a woman on the floor with a collar on, meowing, and he had this grinder thing … and he turned it over and he went, ‘Here you go,’ and I went, ‘Thanks.’ He’s like, ‘You’ve done this before, right?’ And I’m like, ‘Yeah, of course I have.’ So he handed it over and I just did all of it, and he went, ‘Just like your father – you know, that was supposed to be for all of us.’”

Bonham said he “used to take those compliments and be like, ‘Oh, I’m just like Dad.’ I was taking it wrong. Sometimes when I got really drunk they’d go, ‘He’s just like his old man.’” He noted that he’s now been sober for 17 years and has learned to be comfortable surrounded by other people who are drinking. He said he’d be asked, “Do you need us to take the booze out of the minibar? ‘No, but please take the candy out!’”

Elsewhere in the interview, Bonham, now 52, recalled another moment while working with Page. “I would be doing blow, and they found out, so Jimmy cut his guitar solo short,” he said. ” I was halfway down into the dressing rooms and I suddenly hear [that] I’m supposed to come in now. … So we ran back and Jimmy’s just standing there. He was angry because we didn’t offer him any!”

In 2015, Page shared his thought about the untimely drug overdose death of his bandmate, John Bonham:

At the time, Page said to Metal XS:

“[John] and I were really good pals. We were really, really close in our musical collaboration, if you want… the camaraderie. And just the sheer fact that, you know… ‘Bonzo’s Montreux’ [the drum solo by John Bonham, which is the seventh track on the band’s final studio album, ‘Coda’] says it all, really. It was just the two of us working on it over there in the studio.”

“[John’s passing] was a massive loss to everybody. Everybody had been touched by John Bonham’s music.”