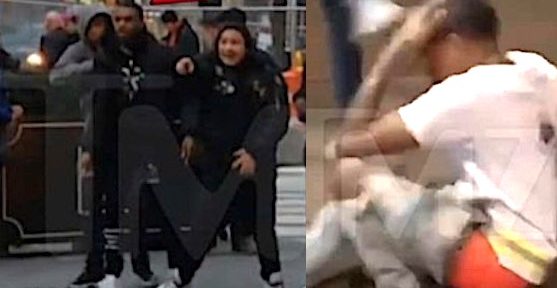 NEW YORK, NY. (THECOUNT) — YBN Almighty Jay was on the receiving end of a brutal beatdown on the streets of NYC, and to add insult to injury, his chains, wallet and even his shoes, all ripped from his body and stolen as he lay injured on the pavement.

The popular rapper, whose real name is Jay Bradley, 19, was involved in the NYC street brawl outside a Saks store where he can be seen on video being beaten by a group of men. Witnesses say both sides engaged in a verbal altercation followed by the beating.

The fight spilled out into the street and, at first, it looked like Almighty Jay’s side was holding their own. Later, though … Jay got separated from his homies and you see him getting kicked HARD in the head by at least 2 guys, reported TMZ on Saturday.

TMZ says the guys who jumped him made off with his wallet, his YBN chain … and his shoes.

Police were called, but no one wanted to report a crime.

Now, a photo of Almighty Jay in the hospital has surfaced showing severe facial swelling, bruising and at least one large laceration. He is also wearing a cervical collar.

In the photo, you can see all the aftermath of the attack in the form of heavy gashes across the side of his face and head as he lays on a hospital bed while wearing a neck-brace, reports FlyHeight. Click on the photo above to view video of the brawl.

We can’t show you the hospital photo here as it is too graphic, but if you still want to view it, at your own risk, you may do so by visiting FlyHeight.