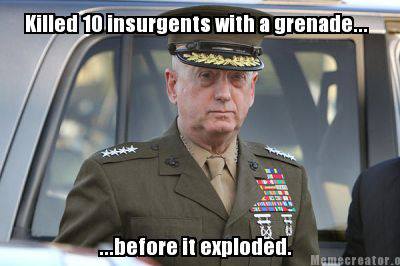 James “Mad Dog” Mattis has been revealed as Donald Trump‘s pick for Secretary of Defense. The President-elect made the surprise announcement during his “Thank You” rally speech in Cincinnati Ohio.

The retired four-star general has long been the subject of knee-slapping memes, mostly because of a steady stream of tough guy quotes generated over his years of service. Many who know Mattis personally say the General is more of a “book worm” than a “mad dog.” He other nicknames include, “Chaos” and “Warrior Monk.” Most of the memes about Mattis poke fun at (often in an admiring way) his image as a military general who is the epitome of a tough guy who speaks with forthright authenticity. Mattis left the Obama administration over disagreements about the administration’s Iran strategy. Trump’s choice of him as defense secretary will require a Congressional waiver because Mattis is only fairly recently retired from the active duty military. Mattis is known for the advance on Fallujah to take out the insurgents in Iraq. CNN said that Mattis, a retired Marine general, earned his Mad Dog nickname “after the 2004 battle of Fallujah in Iraq, where he led British and American troops against Iraqi insurgents.” The Sun said Mattis earned the Mad Dog moniker during “one of the hardest-fought campaigns following the Iraq invasion in 2003 — where he was one of four Commanders leading the British/US troops to take the city from Iraqi insurgents after the fall of Saddam Hussein.” h/t heavy Mattis’ tough guy swagger and talk are legendary. However, he’s also known for his book learning. That’s why his other nickname is the Warrior Monk. Excuse the language, but it’s hard to find memes of James “Mad Dog” Mattis that don’t use swear words. It kind of goes with the territory. After all, the general is the opposite of politically correct. This is a true story that shows the style of leadership that Mattis exhibits. Mattis himself has never been married and doesn’t have children. He has devoted his life to the military. Donald Trump said in Ohio that James Mattis is the closest America has to Patton. Those are big words, but a lot of people agree. He’s a tough guy in a country that likes them. Many memes deal with the fact people see Mattis as a throwback to a different era and the great generals of the past, especially the World War II era. Mattis has a reputation for being willing to stand up to the White House if he doesn’t agree with the administration’s tactics. Mattis’ military credibility and authenticity led some to ask him to run against Trump, but he declined. Good move General!