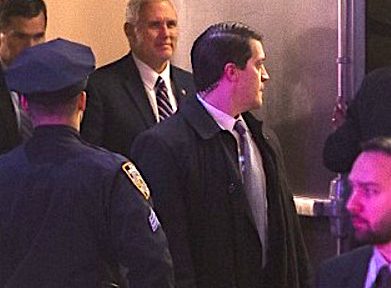 Vice President-elect Mike Pence was rudely booed Friday night while he walked to his seat during a performance of the Broadway hit play “Hamilton.”

Pence was attending the performance at the Richard Rodgers Theatre when suddenly a chorus of boos spontaneously erupted. The crowd continued to mock Pence throughout the performance, including during the song “Yorktown,” when Alexander Hamilton and Marquis de Lafayette sang “Immigrants, we get the job done.” They high-fived each other as the audience cheered. h/t nyp

Brandon Dixon, who plays Aaron Burr, lectured Pence after the curtain call, saying the diverse cast is “anxious” about his administration. ‘We sir, we are the diverse America who are alarmed and anxious that your new administration will not protect us, our planet, our children, our parents, or defend us and uphold our inalienable rights,’ he said. ‘But we truly hope this show has inspired you to uphold our Americans values and to work on behalf of all of us. All of us.’ ‘We truly thank you for sharing this show, this wonderful American story told by a diverse group of men and women of different colors, creeds, and orientations.’ Dixon was quick to defend the cast on Saturday morning, directly replying to Trump’s tweets. ‘Conversation is not harassment sir,’ Dixon wrote. ‘And I appreciate Mike Pence for stopping to listen.’ h/t dailymail To add insult to injury, Pence emerged from the theater to find a group of angry protesters shouting in the New York street. Hundreds of demonstrators were seen outside chanting: ‘F*** Mike Pence.’