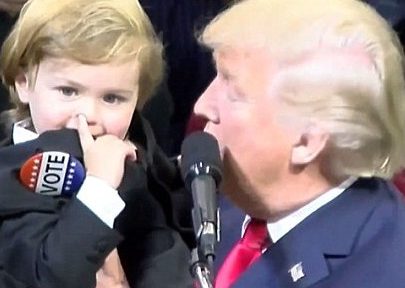 “Look at that guy over there!” Trump yelled and pointed. “Wow! A baby!” He then made his way through the crowd, plucked the one-year-old from his parents and tucked him under his arm like a football on his way back to the podium.

As the crowd roared, the pint-sized Trump could be heard repeatedly telling the GOP candidate that he wanted to stay onstage with him, rather than go back into in the audience with his parents. Too cute. By all accounts, the young republican made a near-flawless debut.