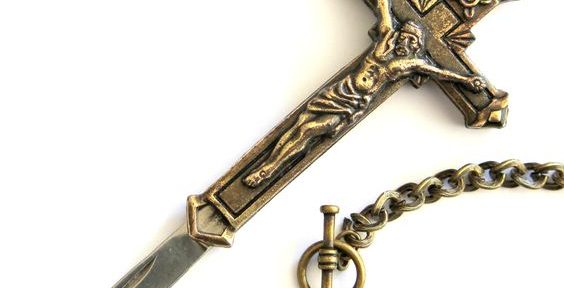 A man was arrested and booked into the Ventura County jail Thursday after stealing several crucifixes from a downtown gift shop and then using the religious symbols as weapons.

Forrest Brantley, 35, sent a 75-year-old man to the hospital and left several others injured in the rampage in normally sleepy downtown Ventura, Ca. Brantley was on suspicion of multiple charges including one count of assault with a deadly weapon, three counts of attempted robbery and one count of elder abuse. Ventura police said they received multiple 911 calls regarding a person out of control after Brantley was allegedly seen committing burglaries, attempting to rob multiple victims on the street and battering them with the crucifixes. h/t kcra At one point, Brantley broke the window of the 75-year-old man’s car and struck him, causing him moderate injuries to the face.