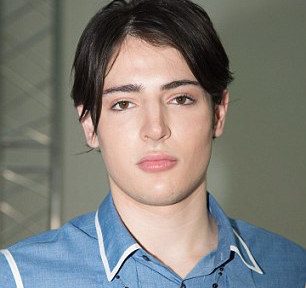 Harry Brant, the son of billionaire Peter Brant and supermodel Stephanie Seymour, was arrested and charged with resisting arrest, possessing narcotics, larceny and refusing to pay a taxi driver a $28 fare.

Brant, 20, was arrested in his hometown of Greenwich, Connecticut, on Thursday after he stiffed a cabbie, resisted arrest and possessing drugs, police said. Authorities said Brant, who was not carrying an ID with him at the time of his arrest, also refused to identify himself until he was finally recognized by an officer. The scion was driven to Greenwich Avenue and allegedly refused to pay $27.85 to Stamford Taxi, The Greenwich Time reported. He then fled on foot and police were called to the scene. Officers said they found Brant, who matched the called-in description of a tall white male wearing a black shirt and black pants, on Railroad Avenue ‘sweating profusely and pale in color.’ When speaking to officers, police said Brant initially said he had not been in a taxi but eventually admitted he had taken one to Greenwich, but did not have the money to pay for it. Brant then reportedly shouted ‘No! No!’ and tried to run from officers when they told him he was being placed under arrest, according to The Greenwich Time. h/t dailymail Police said officers were able to take him down after a struggle with officers. He was then cuffed and hauled off to the police station.