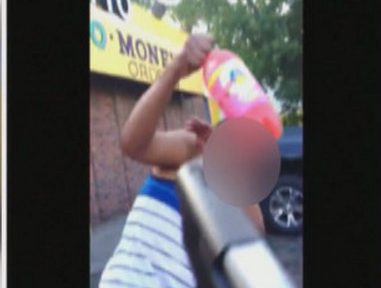 Police believe they have identified a man sought for his participation in a disturbing video of a possible hate crime in Detroit. Steven Drake Edwards was depicted on video pulling a gun on a 23-year-old man as he left a Detroit liquor store because he believed the man was gay.

Cops say Edwards is on the run and are now asking the public’s to help in locating him. He is described as 6 foot five inches with braided dark brown hair and sporting a mustache and goatee. Police say Edwards recorded the alleged hate crime from the passenger side from his parked red car and posted it on Twitter. The video quickly went viral instead of taking it down and showing remorse. The 19-year-old was live on Periscope several times bragging about what he did and justifying his actions with weapons in hands and challenged police to arrest him. h/t fox2detroit