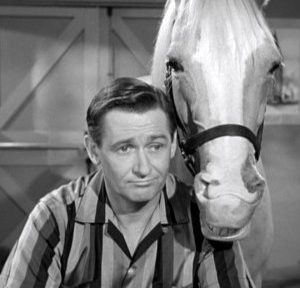 Alan Young, the actor who played on the classic TV series “Mister Ed,” about a talking horse, has died. He was 96. On the series, which ran from 1961-66 on CBS, Young played architect Wilbur Post, who was married to Carol (played by Connie Hines, who died in 2009) and kept a horse, Mr. Ed, in their
suburban stable. Mr. Ed, voiced by Allan “Rocky” Lane, would speak only to Wilbur, but given Mr. Ed’s rather outlandish personality and the superbly mild effect of Young’s Wilbur, just who owned whom could occasionally be a matter of debate. h/t variety Our thoughts and prayers go out to Young’s family and friends at this difficult time.