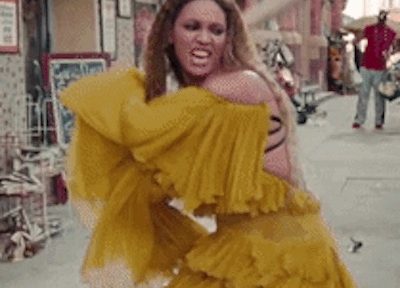 Swarms of Bey fans accidentally directed stinging comments towards the cooking goddess – instructing her to stay away from Beyonce’s man. No word on if that warning includes Ray baking cookies for the rap mogul. It goes like this: When fashion designer Rachel Roy responded to Beyoncé’s Lemonade with an Instagram some saw as an admission that she was the woman Jay cheated on Bey with, Beyoncé fans ~lost it~ on Roy. However, some fans read the name “Rachel Roy” as “Rachael Ray” and proceeded to bomb Kitchen Queen Rachael Ray’s Instagram with bee and lemon emoji, the universal signifiers of their Queen Bee. Basically, they poured lemonade all over the wrong woman, and Rachael Ray probably had to pull her gorgeous face away from the most delicious plate of bucatini ever to say, “Wait? What’s a Jay Z? Is that a new Riesling?” (J/K, Rachael totally knows who Jay Z is. She knows everything; even how to make a delicious vegan chili!) h/t cosmopolitan The BeyHive bombarded Ray with lemons and bees while Rachael’s fans defending her with “fork and knife” emojis.