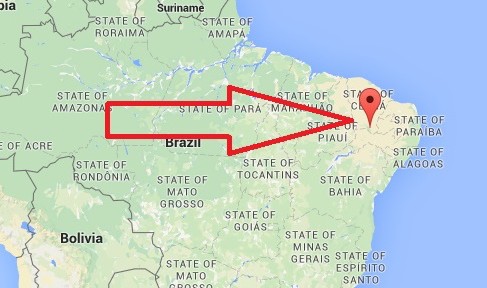 A Reddit user has exposed the shocking fact that the epicenter of the zika outbreak is located precisely where so-called genetically modified or “GM” mosquitoes were released in 2015.

The particular strain of Oxitec GM mosquitoes, OX513A, are said to be genetically altered in an effort to cause the vast majority of their offspring to die before they mature. The insects were said to have been released in an effort to control dengue, zika, and other viruses, but that plan has appeared to have backfired, or did it? Those genetically-modified mosquitoes work to control wild, potentially disease-carrying populations in a very specific manner. Only the male modified Aedes mosquitoes are supposed to be released into the wild — as they will mate with their unaltered female counterparts. Once offspring are produced, the modified, scientific facet is supposed to ‘kick in’ and kill that larvae before it reaches breeding age — if tetracycline is not present during its development. But there is a problem. According to an unclassified document from the Trade and Agriculture Directorate Committee for Agriculture dated February 2015, Brazil is the third largest in “global antimicrobial consumption in food animal production” — meaning, Brazil is third in the world for its use of tetracycline in its food animals. As a study by the American Society of Agronomy, et. al., explained, “It is estimated that approximately 75% of antibiotics are not absorbed by animals and are excreted in waste.” One of the antibiotics (or antimicrobials) specifically named in that report for its environmental persistence is tetracycline. In fact, as a confidential internal Oxitec document divulged in 2012, that survival rate could be as high as 15% — even with low levels of tetracycline present. “Even small amounts of tetracycline can repress” the engineered lethality. Indeed, that 15% survival rate was described by Oxitec: “After a lot of testing and comparing experimental design, it was found that [researchers] had used a cat food to feed the [OX513A] larvae and this cat food contained chicken. It is known that tetracycline is routinely used to prevent infections in chickens, especially in the cheap, mass produced, chicken used for animal food. The chicken is heat-treated before being used, but this does not remove all the tetracycline. This meant that a small amount of tetracycline was being added from the food to the larvae and repressing the [designed] lethal system.” h/t anonhq

As the WHO stated in its press release, “conditions associated with this year’s El Nino weather pattern are expected to increase mosquito populations greatly in many areas.” President Obama called for a massive research effort to develop a vaccine for the Zika virus, as one does not currently exist. And let’s not forget, it’s also healthcare signup time!