Robert Dear: I Am A Warrior For The Babies 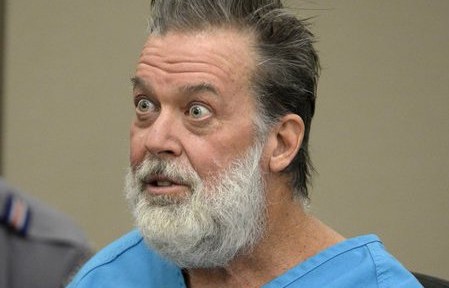 Robert Dear, the man accused of killing three people last month at a Planned Parenthood clinic in Colorado Springs, Colorado, said in a courtroom outburst, “I am a warrior for the babies.”

Dear, 57, appeared in court and was charged with 179 felony counts. “You’ll never know what I saw in that clinic,” Dear said. “Atrocities, that’s what they want to seal.” He also said, “I am guilty. There is no trial,” and “Protect the babies.” At one point, a bailiff placed a hand on Dear’s shoulder in an apparent attempt to quiet him. When lawyers spoke about a listing of victims in the incident, Dear, his facial expression framed by a shock of hair, blurted out, “Could you add the babies that were to be aborted that day? Can you add that to the list?” Dear made reference to his public defender, Daniel King, who also represented Colorado theater shooter James Holmes: “Do you know who this lawyer is? He is the lawyer for the Batman shooter — when they drugged him all up and that’s what they want to do to me.” While King told the court there were questions about his client’s competence, Dear said, “You are not my lawyer.” h/t cnn