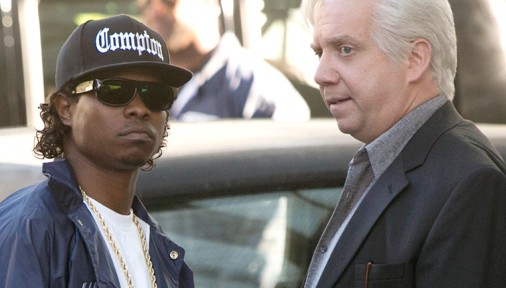 Heller has just filed suit against Ice Cube, Dr. Dre, the Estate of Eazy-E, NBCUniversal and others, claiming the portrayal of him in the movie was false and damaging.
Heller says he was portrayed as “the bad guy” and “a sleazy manager who took advantage of Eazy-E, Dr. Dre and Ice Cube.” And he says there are other lies in the movie, including:
— He withheld a $75k check from Ice Cube
— He fraudulently induced Dre and Cube to sign unfavorable contracts
— He enjoyed lobster brunches while the contracts were being signed
— He was fired by Eazy-E
He claims he never gave permission to use his likeness and he wants profits from the movie as well because NBC sold tickets off his back. He also claims producers used his book without permission for pivotal scenes, including the one where Suge Knight strong-armed Eazy-E into signing away his rights to Death Row.
And this is funny … he says producers didn’t even bother to give his character a fake name, like “Gary Beller.” h/t tmz

Heller is suing for $35 million in compensatory damages and a minimum of $75 million in punitives.