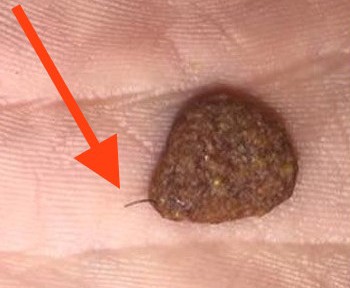 A pet owner posted the scary photo to social media clearly showing a thin wire-like fiber sticking out of a kernel of dog food. The poster said the foreign objects were found in “every single piece,” and were “sharp” to the touch. “I decided to check the bag I have, since my dog has been eating more grass and having stomach issues,” said Samantha Barrett in a Send It To 12 photo, “and sure enough almost every piece of food had these black (and some lighter color) hairs coming out of them. Some people think it is wire some think it is pig/cow hair but it is pretty sharp.”
h/t nbc12

Pedigree’s social media accounts have been inundated with people claiming to have found similar objects.

The company has not yet directly responded to the issue.

We have been informed by one of our Twitter users that the fibers may be in-fact pig hair!

@THECOUNTnews they say it's part of "Meat & Bone Meal" which is one of the ingredients.