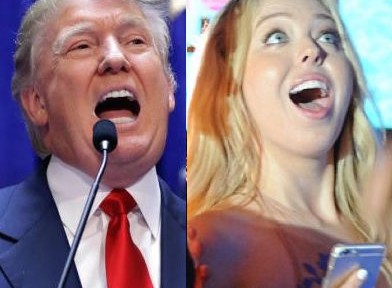 Her father is Donald Trump, but forgot about him as you gander his 22-year-old daughter, Tiffany.

Donald’s socialite daughter, was recently spotted in the front row of a Jason Derulo concert in The Hamptons. Flanked by a few of The Rich Kids Of Instagram, Tiffany wailed in ecstasy and gasped for air as she danced feet away from the hip hop singer at  a VH1 Save The Music benefit. h/t dailymail

At one point, sources say, her party was advised by a bouncer to chill out as they crazily leaped around near the stage. Tiffany, a senior at her father’s alma mater the University of Pennsylvania, was raised by her mother Marla Maples.