Fists were flying during a taping of popular reality show “Storage Wars” in Palm Springs.

Dan Dotson and Dave Hester were bidding on the same auction when Dave approached Dan yelling obscenities that’s when things got heated. 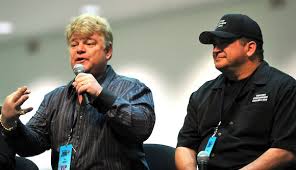 A melee erupted — Dave punched Dan in the face … then Dan raked Dave’s eye. Dan’s wife, Laura, jumped on Dave’s back, and then SHE got tossed through the air! Security guards eventually broke it up, and we’re told Dave immediately wanted to get back to the auction.

No dice. Producers booted Dave, who we’re told was heading to a hospital. Unclear what he hurt in the fight. h/t tmz