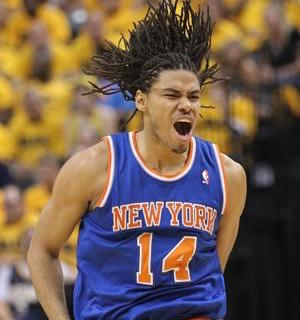 Copeland, 31, a former member of the Knicks, was stabbed in the abdomen around 4 a.m., the New York Daily News reported. His wife, Katrine Saltara, 28, and another woman were also slashed during the argument. All three were rushed to area hospitals and are expected to recover. Shezoy Bleary, 22, was arrested for allegedly striking Copeland, Saltara and 53-year-old Catherine Somani with a knife outside celebrity nightclub 1 OAK. Bleary and Somani were reportedly acquaintances. h/t yahoo.sports

Thabo Sefolosha, 30, and Pero Antic, 32, players for the Atlanta Hawks, were also arrested in the incident after refusing to disperse when police attempted to set up a crime scene. Both player face charges of obstructing justice, disorderly conduct, resisting arrest and menacing.