Former Pearl Jam drummer, Dave Abbruzzese, is wanted by police in Denton, Texas police over two drug charges. A warrant has been issues for his arrest, the first being issued in September.

Official documents show there’s a $1,000 reward for any information leading to his apprehension. 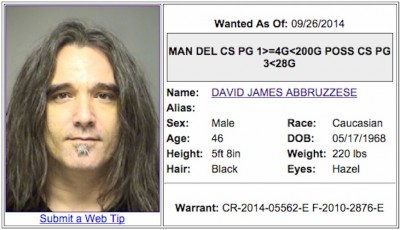 According to the Denton County Crime Stoppers webpage, Abbruzzese has been charged with possession of a controlled substance, and manufacture or delivery of a controlled substance. The first charge is a Class A misdemeanor, the penalty of which is a $4,000 fine or up to a year in county jail. The second charge, however, is a first degree felony in the state of Texas, with a penalty of five years – to – life in prison. h/t consequenceofsound

Abbruzzese joined Pearl Jam’s the day before the band’s debut album Ten was released in 1991. He remained a member of the band for the next three years, and drummed on both Vs. and Vitalogy, but was fired before the latter was released.