Imitation Game star, Benedict Cumberbatch is officially off the market after getting married to theater director Sophie Hunter on Valentine’s Day.

The couple wed in a ceremony on the Isle of Wight. A Cumberbatch spokeswoman said on Sunday that the couple had married over the weekend, surrounded by family and friends. 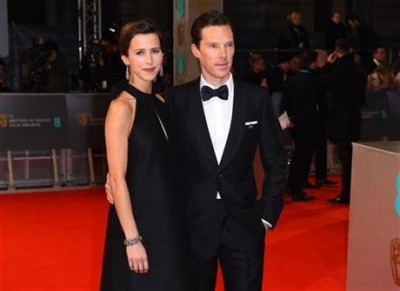 The 38-year-old Cumberbatch rose to prominence with his modern-day portrayal of the cerebral sleuth in “Sherlock.” He has been shortlisted for an Oscar for his role as code-breaking genius Alan Turing in “The Imitation Game.” Turing helped win World War II with his work on cracking Nazi codes, but he was later prosecuted for homosexuality and committed suicide. Hunter, 36, and Cumberbatch appeared together in the 2009 thriller “Burlesque Fairytales.” The couple, who announced their engagement with an eight-line item in the Times of London in November, said last month they are expecting their first child. h/t ap

Andrew Scott, who plays Moriarty in “Sherlock,” aka, Holmes’ boyfriend, was among the guests.