File this under: “Why didn’t I think of that?” GE and Keurig introduce a refrigerator with a built-in coffee maker.

The GE Cafe Series refrigerator will allow users to brew a cup of fresh, piping hot cup of coffee. 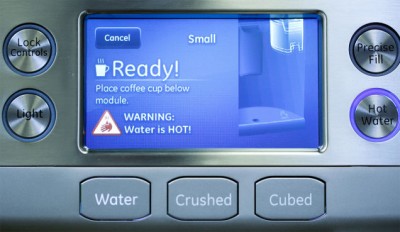 The product was unveiled during a Jan. 14 news conference in Louisville. “Over the last couple of years, GE surveyed Cafe French door refrigerator consumers who have the hot water feature; they asked us, ‘When can we have a refrigerator that dispenses coffee or tea?'” said Dan Goldstein, refrigeration marketing manager for GE Appliances. “In fact, two-thirds said they’d be interested in a single-serve hot beverage dispenser. This inspired GE and Keurig to pursue the development of the industry-first built-in, single-serve brewing system from a refrigerator.” – “With more than 60 brands that consumers love and over 400 beverage varieties in the system, Keurig is all about offering consumers the great-tasting, high-quality beverages they want, simply and conveniently,” said Mark Wood, chief product officer for Keurig Hot Beverage Systems. “As an innovator in the personal beverage system industry, Keurig is excited to partner with GE and to be the first to offer hot single-cup technology right from a refrigerator.” h/t wave3