Chad Kelly, the nephew of former Buffalo Bills legend Jim Kelly, was arrested after fighting with bouncers and police at a Buffalo bar in the early morning hours.

Chad, 20, was ranked as the No. 1 junior college dual-threat quarterback in the 2015 before getting kicked off the team after a confrontation with Clemson coaches. 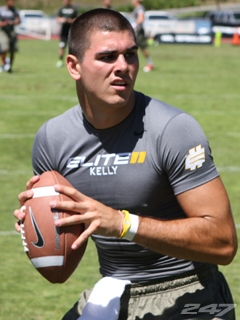 “Chad refused to leave Encore at about 3:15 a.m. and punched a bouncer in the face, Buffalo police said. Kelly’s companion, Brandon Hickey, 21, of Clarence, had been thrown out of the bar earlier and tried to re-enter, police said. Kelly continued to fight with two bouncers and stated “I’m going to go to my car and get my AK-47 and spray this place,” according to a report. Buffalo police officers responded and forcibly removed Chad from the vehicle, officers said. Police said Kelly kicked and tried to swing at officers as they removed him from the vehicle. They said he resisted getting into a patrol vehicle and struggled with staff at central booking. h/t 247sports

The bar’s security staff, Scott May and Clay Hubert, suffered minor injuries in the melee, including pain and swelling.