Floyd Mayweather 2 Hour SIT DOWN With COPS Over Murder Suicide

Floyd Mayweather had a sit-down with the L.A.P.D. over the murder-suicide of rapper Earl Hayes, and his wife, Stephanie Moseley.

The boxer was interviewed for 2-hours on Wednesday, telling detectives he did his best to talk Hayes, also his best friend, out of the killings. 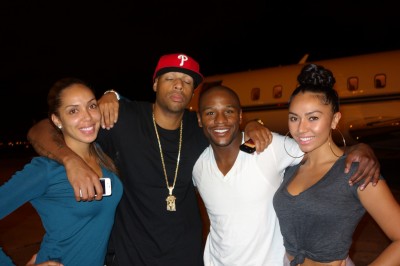 Law enforcement sources said Floyd confirmed that he was on FaceTime Monday morning with Hayes when the rapper walked away from the phone, into the bathroom and pumped multiple bullets into his wife, Stephanie Moseley. Floyd told detectives after Hayes shot his wife, he came back to the phone and continued talking with Floyd. The boxer says Hayes said he was going to shoot himself and Mayweather pleaded with him … to no avail. h/t tmz

Detectives asked Floyd why Hayes called him at 7 AM. he said it was because they were best friends and Hayes was trying to say goodbye.