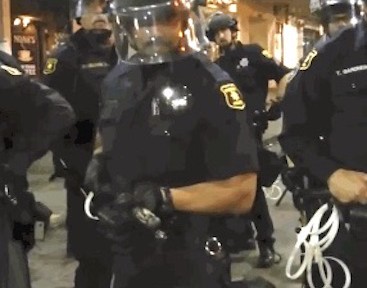 The news said the protest had turned violent over the weekend, and now we know why. Cops taunting protesters, and it was all captured in a video that now lives forever on YouTube..

The 10-minute video, above, shows Berkeley police officers aggressively quelling a march in the college town east of San Francisco on Saturday evening.

Police push and shove the students and hit them with nightsticks as they forcefully move them down Telegraph Avenue in Berkeley. h/t mashable

In the video, the police begin corralling students backward, swinging their batons and repeatedly yelling “move.” Within the first minute of the video, an officers wrestles a woman to the ground after she refuses to move, and arrests her.