Adrian Peterson Getting Hit Where It Really HURTS!

Adrian Peterson “just did it,” when it came time to deliver a thumpin’ on his young child, and now the baller is getting hit hard himself, where it really hurts the most, the wallet.

NIKE has announced that they have dropped Peterson’s endorsement deal, directly after he successfully struck a plea deal in his child abuse case. 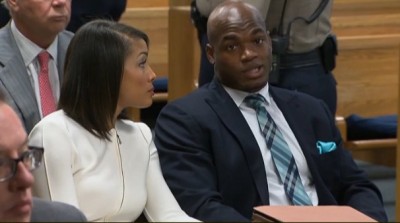 Nike had suspended its contract with Peterson in September, right after he was arrested for hitting his son with a switch — but today the company fully cut ties with the Vikings running back. Nike has not said why it finally decided to 86 him altogether — but it comes just 2 days after he entered a no contest plea to one count of misdemeanor reckless assault. So, it certainly seems tied to the conviction. h/t tmz

Still no word on when Peterson will be removed from the NFL’s exempt list and allowed to suit up again.