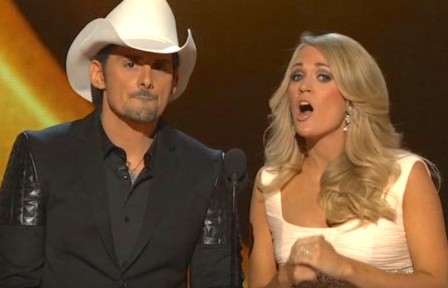 Carrie Underwood, appearing as co-host of country music’s biggest night, the CMAs, thinks she knows why President Obama and the Democrats lost the senate. Using the acronym P.P.T.S.D., (Spoiler alert, the P.P. – was short for “postpartum,” which of course, is one word, oops,) got huge laughs from the crowd.

Carrie and her hosting partner, Brad Paisley, went for a bit of political humor for the second year running via a reference to Taylor Swift’s abandoning of country music, dubbing it, Postpartum Taylor Swift Disorder.. 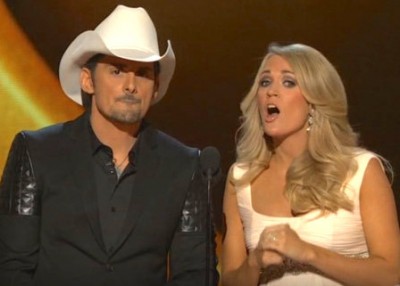 Paisley kicked up some dust after making what some on social media are calling a racist joke.

Some thought the quip was Paisley’s lame attempt at humor, while others vehemently objected to it, saying it crossed the line.